J.H. and C.K. Eagles initial built a mill in the early 1890s at Arch and Ash streets in Coal Township, eventual site of the Coal Township Purple Demons and now the Coal Township High Rise.
With eyes on the future, the brothers decided on a gigantic expansion. They engaged the services of Shamokin Lumber Company to erect a plant in Kulpmont in 1916. They also set in motion plans for The Mill in Shamokin. In 1915 the Eagle brothers purchased property along Franklin Street occupied by the John Mullen Iron Foundry at a cost of $65,000.
Opening in 1917, the J.H. and C.K. Eagle Mill, also known as the Shoe Mill, or simply "The Mill," contained 500,000-square-foot of floor space; 4,808,500-cubic-foot of brick; and 16 miles of pipe for heating and sanitation purposes.
The Mill that fronted Franklin Street in Shamokin went into operation in 1917. The plant reached its zenith in 1923 when 3,300 people were employed.
A Throwing Plant, another satellite plant, was situated between Rock Street and Shamokin Creek at Race Street. It was demolished in 1970.
The Print and Dye House was located on Water Street, directly across from The Mill. A fire on Oct. 6, 1993, would eventually destroy part of the building. At the time, it was owned by Shamokin Filler Corporation.
In July of 1937, J.H. and C.K. Eagle Corp. filed a petition under the National Bankruptcy Act to prevent a forced liquidation. This was applied, and the plants in Mechanicsburg, Phoenixville, Kulpmont and on Rock Street were sold. The company was declared bankrupt on Aug. 6, 1938, bringing an end to a once thriving business.
The Shamokin Woolen Mills leased a portion of The Mill. The company was reorganized in August of 1938, as the Shamokin Dye and Print Works, Inc. Heading the group were Tony Van Maanen, president; and Arthur Gardiner, vice president. The Print and Dye Works failed in 1942 and was reorganized as the Shamokin Realty Corporation.
The Corporation was a leasing company, which over a period of years leased the space in both the Dye House and Mill. Among the firms that leased the building were the Shamokin Shoe Company and CluettPeabody Corporation, manufacturer of Arrow Shirts. In 1972, the Corporation was dealt a major blow when the Arrow left.
Read More 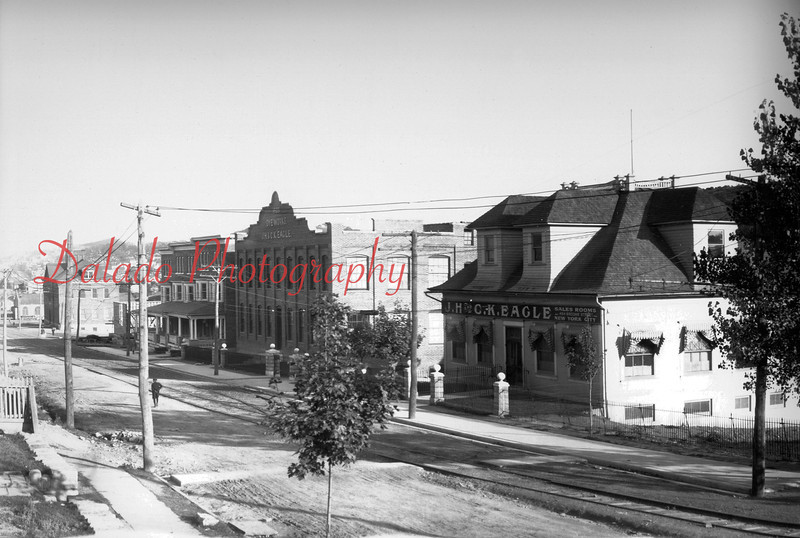 J.H. and C.K. Eagles' first mill was built in the early 1890s at Arch and Ash streets in Coal Township, site of the Coal Township High Rise. The Mill that fronted Franklin Street, near Independence Street, went into operation in 1917. The operation reached its zenith in 1923 when 3,300 were employed at The Mill. The payroll at the time was placed at between five and six million dollars. (St. Johns Church at Arch Street and Eagle Avenue, center, left, is seen being built.)